(Disclaimer; this is a sponsored post, in which I was given free items in return for an honest review.)

In late March, I was one of several people who were chosen to do a campaign for Santa Maria through Buzzador. What I was going to test were the new Jamaican Jerk Tacos items in the Street Food series. As I'm always into trying new flavours and I'm interested in street food, I couldn't resist the opportunity of testing it out. I also ended up googling Jamaican Jerk Chicken and came across this page, for those who are into jerk chicken made from scratch. 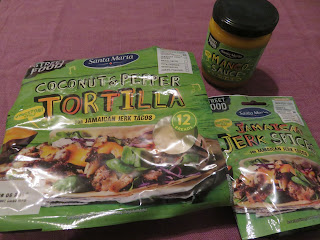 Here's the items that were included in the kit; coconut and pepper tortillas, mango sauce and Jamaican jerk spices. The steps were easy to follow and I enjoyed eating it as it was many flavours going on at once, though I might leave out the mango sauce next time.

Even though this was tasty, I might try making Jamaican Jerk Chicken from scratch another time, just to compare with this Jerk Taco kit.
Lagt inn av GothicVamperstein kl. 11:24