Earlier this week I ended up using my beloved slow cooker for making Potato and Spring Onion Soup. I've seen several recipes for various slow cooker potato soup on Pinterest and with a bit of inspiration from a couple of them, I ended up making my own version and I wanted to share it with you. I've probably mentioned this before, but using a slow cooker is a nice thing, as it does most of the labour (apart from the prep work) and you don't need to think that much while making dinner with it. It certainly aids me while studying, and as I usually cook in big portions, I get leftovers to eat for a couple of days afterwards. 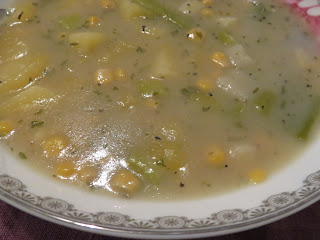 Blend the milk and about 3 of the diced potatoes in a blender and add that mix, plus the rest of the ingredients (apart from the parsley) in a slow cooker. Cover and let it cook on high heat for 3-4 hours or low heat for 3-4 hours, depending on the potatoes. Just before serving, add the parsley.